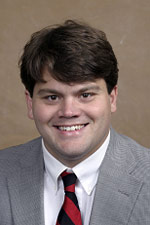 Hunter Towns was born in Dublin, Georgia and grew up in Wheeler County in south central Georgia, where his family still has strong roots in the business and civic community. Hunter has his own public relations firm, Hunter E. Towns Public Affairs, as well as working with Capitol Partners Public Affairs Group, Inc. Previously he served as Government Relations Manager in the Atlanta office of Womble Carlyle. Prior to joining Womble Carlyle, Hunter served as Deputy Director of Legislative Affairs for Georgia Governor Sonny Perdue. Hunter graduated from the University of Georgia with a degree in journalism, serving as an editorialist for The Red and Black for three years and contributing editorialist for The Athens Banner Herald for one year.

Hunter Towns served as Government Relations Manager in the Atlanta office of Womble Carlyle, where he worked with Charles B. Tanksley, former five-term member of the Georgia State Senate. While with Womble, Hunter served his clients in many areas from procuring a billion dollar state contract, protecting them from harmful legislation, while championing their efforts.

Prior to joining Womble Carlyle, Hunter served as Deputy Director of Legislative Affairs for Georgia Governor Sonny Perdue where he was the Governor’s liaison to 236 state legislators. While serving in this role, Hunter helped to coordinate and push the legislative agendas of both the Governor and more than 80 state agencies. He served as an advisor to Governor Perdue on issues regarding legislation, policy and politics.