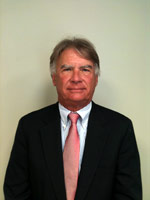 Russell N. “Rusty” Sewell was born and raised in Columbus, Georgia. He graduated from Georgia Tech in 1970 with a B.S. in Textiles and received a law degree from the University of Georgia in 1973. Rusty began his legal career with the Judicial Council of Georgia, followed by the Georgia Attorney General’s Office, and the Georgia General Assembly’s Office of Legislative Counsel. He was the North Georgia Coordinator for the Joe Frank Harris gubernatorial campaign and was Executive Counsel to the Governor after Joe Frank Harris was elected. After serving in the Harris administration, he was a partner at the law firm of Long Aldridge & Norman (now Dentons) for four years. He then became a partner at the government relations and public affairs firm of Boller, Sewell & Segars. He is currently the president of that firm, now doing business as Capitol Partners Public Affairs Group. Rusty and his wife, Linda, have two children.